Skip to content
There was a march to fight against the belief that some people are raped or sexually assaulted & it’s due to their clothing! Err….no i don’t think so!
It all started whena police officer, in Canada, told women they should stop dressing like ‘sluts’ to avoid being raped. Thousands joined the SlutWalk London to show their disapproval. 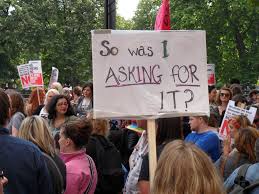 I believe women should have the right to wear whatever they like, without being threatened by mistreatment. Organiser of the London ‘SlutWalk’, Anastasia Richardson (17) felt compelled to bring this march to the UK after seeing women from all over the globe uniting.
Using just a Facebook page, she spread the word across the UK and had thousands of people joining, after just 10 days & every UK newspaper was covering the story! Organisations like RapeCrisis were quick to get involved in the event.

Alot of the women who took part in the protest, were angry because of the idea that women who were raped could be blamed for their attire, it is a gross misconception. The protesters were carrying signs and wearing outfits to emphasize their cause. Signs read: “My clothes are not louder than my voice” and “No is NOT a yes, no matter how short my dress!” Over 5,000 women on the SlutWalk were there to show that conservative attitudes (“If you wear low-cut tops and short skirts, accept the consequences”) will not be tolerated.
Do you agree? Can a woman’s “slutty outfit” be a just reason for rape? NO. Clothing cannot be blamed for the comments or actions of others and it is ludicrous to think so. Let’s hope the SLUTWALK event has made an impact and will change the attitudes about sexual assault. I hope so..

I’ll be following the SlutWalk campaign..& I’ll be wearing whatever the hell I like too!!